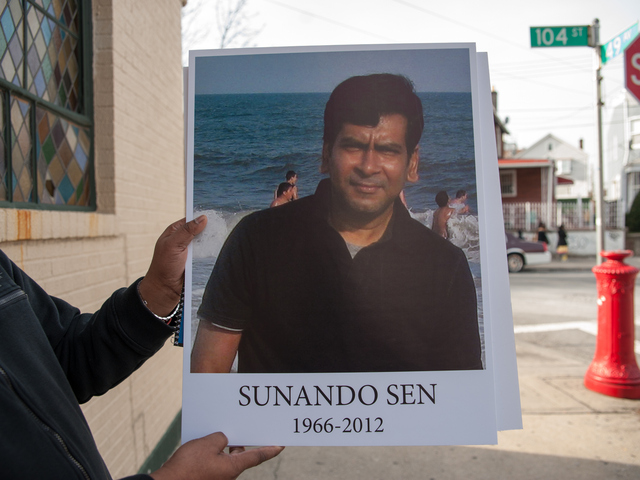 “Sunando Sen was shoved to his death on a number 7 train platform in Queens on Thursday December 27th, 2012. He was cremated on Monday December 31st, 2012.” (Photo credit: DNAinfo/Theodore Parisienne)

On Salon, Wajahat Ali discusses the role of Islamophobic rhetoric in last week’s murder of Sunando Sen, a man of Hindu background who was pushed off a subway platform into the path of an oncoming train in New York last week:

A senseless tragedy like this affords an opportunity, requires necessity and demands urgency for diverse American communities, especially Muslims, Sikhs and Hindus, to unite in solidarity against hate and intolerance. In America, there exists space for legitimate criticism, debate, and discussion about  religion, race, and ethnicity. But we must finally confront ourselves and ask how do we, as a society, benefit from hysteria, fear and scapegoating? What do these Islamophobes inspire except division and lucrative, personal paychecks?

The murderer, Erika Menendez, is quoted openly proclaiming her hate of Hindus and Muslims:

Menendez admitted the hate crime, explaining she “pushed a Muslim off the train tracks because I hate Hindus and Muslims ever since 2001 when they put down the twin towers I’ve been beating them up.”

It is convenient to dissociate Islamophobic speech from the acts of a deranged few. However, when the motivation behind the speech is similar to that of those who commit the crimes, those who ferment hate with prejudicial speech cannot cleanly disconnect themselves from those who commit crimes invoking a similar view.