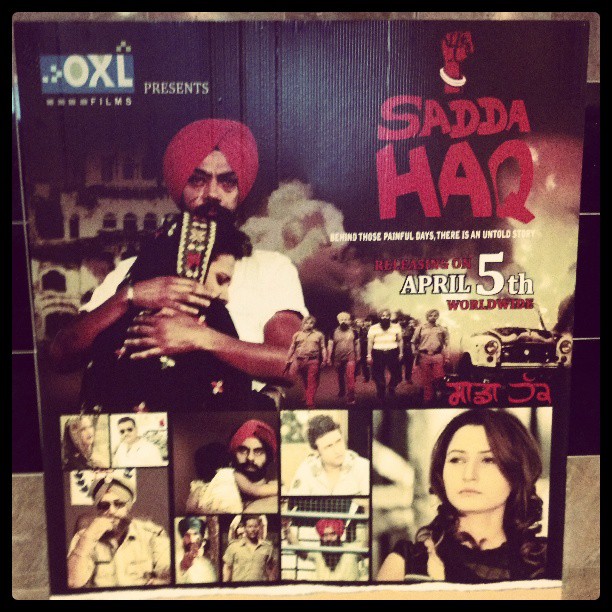 A poster for the film “Sadda Haq” at an American movie theater.

The Punjabi film “Sadda Haq” (loosely translated as “our rights”) — telling a story about the insurgency in Punjab, India, during the 1980s and 1990s — opens today around the world. Not so ironically, the film has just been banned by the Punjab government, the land in which the film is set.

“The Punjab government has imposed ban on the screening of movie ‘Saada Haq’ till further orders. This step has been taken to maintain communal harmony in the state,” an official spokesman said Friday.

In what is self-lauded as the “world’s largest democracy”, it is interesting that a Punjabi film could be such a threat to “communal harmony” in India, and indeed, such a statement reflects the nature of what is in Punjab today, a “peace” contrived by corruption and the denial of rights and justice that, in this context, has a decades-long tradition in India.

The censoring or banning of a film in India that portrays the horrific events of the 1980s and beyond is not unprecedented. The 2005 film “Amu” — about the anti-Sikh pogroms organized by government officials in November, 1984  — was censored by the Indian government.

This recent banning of a film only highlights the human rights issues in Punjab and India. In fact, a must-read piece by Sukhman Dhami, a co-founder of Ensaaf (an organization which is documenting those who disappeared at the hands of state agencies in Punjab), discusses the official suspension of human rights in Punjab by the Government of India in 1988 and of the human rights abuses that were perpetrated by the state on its people which were never judiciously addressed:

“India repealed the Constitution’s due process protections for the state of Punjab. Security forces now had the legal cover to target whomever they suspected of participating in the rebellion. Many suspects were picked up by the police and never seen again. In other cases, individuals unconnected to the conflict were targeted to instill fear in the population. And still others were targeted for political purposes, including appeasing police and military officers emboldened by their newfound powers.”

Today, decades and thousands of lives later, the India’s central and state governments continue to attempt to erase this history and its aftermath.

On the other side of the globe, the film opens today in theaters across the United States, coincidentally just after the US Government responded to last winter’s petition to the White House (submitted by Sikhs For Justice) to recognize the targeted killings of Sikhs in 1984 and beyond as a genocide. While the US Government’s response evaded the issue of genocide, there is a clear recognition and condemnation of the violence that targeted the Sikh people in their homeland:

It cited the example of the State Department’s Official Country Reports on Human Rights Practices which “covered the violence and its aftermath in detail, with sections on political killings, disappearances, denial of fair public trials, negative effects on freedom of religion, and the government’s response to civil society organizations investigating allegations of human rights violations.”

It is a story about the violence and its aftermath that “Sadda Haq” addresses. While the film cannot presently be seen in India, you can find a local screening in the United States here: 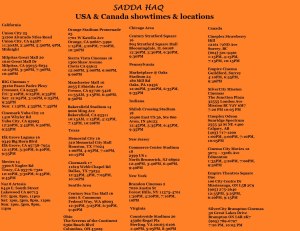