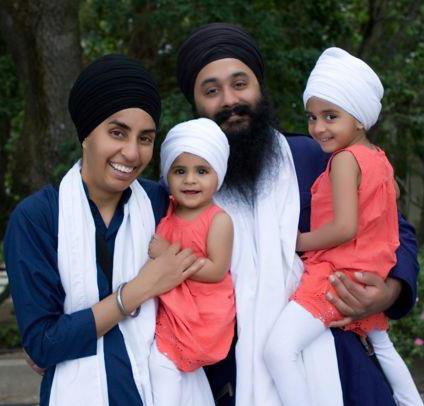 “Ikman and Manjot Singh, shown here with their children, were forced to leave an AMC theater in Emeryville, Calif., after security guards accused the couple of carrying weapons.” (Source: India West)

A recent incident in which a Sikh couple was ejected from an AMC movie theater in Emeryville, California, because they each were wearing a kirpan, a small sword that is a recognized article of the Sikh faith (worn by Sikhs who are initiated into the Khalsa order), has raised the issues of religious freedom and racial profiling:

On June 22, Manjot and Ikman Singh were preparing to watch the new Superman movie, “Man of Steel,” at AMC’s Bay 16 theater in Emeryville. After finding seats, Manjot Singh went to the concession stand, where he was confronted by security guards who said he was carrying a weapon. Singh and his wife Ikman both wear kirpans under their clothing; both were asked to leave the theater.

AMC Theatres claims to have a “no weapons” policy and on this basis, Manjot Singh and Ikman Kaur were forced to leave the movie theater by security unless they removed their kirpans. Upon refusing, AMC gave the couple a refund for their tickets and had them leave the theater.

Certainly, many people would find the actions of the theater’s security acceptable in light of their no-weapons policy, since the kirpan could fall under the category of a weapon. In the eyes of many, the concerns for security and safety are of utmost importance. Further, commenters have argued that this is considered equitable treatment — no weapons for anyone, regardless of the reason.

However, what if such a policy compromises the religious rights of a Sikh, and moreover, what if it was shown that wearing the kirpan was quite safe for both the Khalsa Sikh, and the people around this wearer?

In their own defense, AMC stated that “this matter is about the weapon alone and not at all about religious freedoms.” However, once an individual is banned from an AMC theater because of their religious practice, it indeed becomes an issue about religious freedoms. The kirpan, as mentioned, is an article of faith for the Sikhs who are initiated as members of the Khalsa, and, alongside other articles, must be worn at all times. The kirpan comes with the mandate that it be used to protect the weak or defenseless, and for use as a last resort. It is a sacred item for which Sikhs hold the utmost respect, and thus safety of those around the wearer of the kirpan is also primary concern for Sikhs. As such, it is very rare and unexpected if a kirpan is misused.

Also not insignificant to the issue is how it came to be that the theater’s security targeted Manjot Singh in the first place — Manjot Singh and then Ikman Kaur were isolated simply based on their appearance. As their legal counsel Harmeet Kaur Dhillon described, the theater’s security “singled [Manjot Singh] out for questioning because he is Sikh and looks different, and because his very appearance as a Sikh made them feel uncomfortable.” Allegedly, statements made by a security guard lead to this conclusion:

“I know all about Sikhs and we have a zero tolerance policy towards weapons,” [said a security guard] according to Singh.

Thus, we have an instance of profiling, and one now wonders if every Sikh — initiated into the Khalsa or not — attending a movie in the AMC theater in Emeryville, California, or nationwide, will be subjected to the same targeting and scrutiny. How far is AMC willing to go down this road?

There are also inconsistencies in the accounts of the incident provided by Manjot Singh and AMC Theatres. While Manjot Singh claims that he was wearing his kirpan beneath his clothes and out of view (a very common practice), AMC states that their security staff saw the kirpan and that it was unsheathed, which is a very unlikely way for a Sikh to wear the kirpan, especially in the movie theater. On the face of it, AMC’s account is not only inconsistent with Manjot Singh’s claim, but also inconsistent with common Sikh practice.

In light of the sanctity and relative safety associated with wearing kirpan, it is surprising that AMC Theatres has allowed this to become such an issue. Personally, I have watched movies on many occasions with initiated Sikhs who wear a kirpan, and it did not affect my ability to enjoy a film at all. On the other hand, it is almost every time that my ability to enjoy a movie has been hampered by someone with a smartphone. Interestingly, AMC security does not proactively seek out and eject people with smartphones in their pockets.

Manjot Singh and Ikman Kaur are seeking an apology and change in policy from AMC Theatres. Many in the Sikh community are also proposing a boycott of AMC Theatres until they change their policy to accommodate this Sikh article of faith. However, I would submit that the Sikh community gives the AMC theater chain much more of our business, just so that we may get to know each other a little better.