American Turban was founded in 2010 by Rupinder Mohan Singh who, after obtaining American citizenship earlier that year, sought to articulate the experience of being a Sikh in America.

This blog was originally intended to demonstrate that being American and being Sikh were parallel and often convergent paths and in full alignment. Time has offered some reframing in this regard. As Rupinder continues to work to understand and imbibe the teachings of the Sikh Gurus, and in participating in the Sikh advocacy/activist spaces, he began to recognize that trying to place the spirit of Sikhi alongside notions of American patriotism isn’t always a clean process.

Social media has become commonplace over the life of this blog, but it wasn’t always so. Back in 2010, social platforms were in their infancy and many community discussions had taken place on blogs like this one. In time, platforms like Facebook and Twitter had taken over as sites of discussion, but these spaces have become noisy, reactive, hostile and often unforgiving. Further, many who have control of the Sikh narrative in these spaces seem too focused on framing conversations for viral consumption. The superficial nature of social media conversation combined with influencer culture consumed with likes and follows has stripped our conversations of engaging depth. These factors have also shaped how the Sikh community has been understood by others, and how the community has come to understand itself. As such, the emergent presentation and discussion of the Sikh community and beliefs has increasingly felt unsatisfactory, and it is the intent of this blog to offer a space for thought, open reflection and discussion.

Accordingly, this blog continues to evolve and seeks to continue the conversation around being a Sikh in America — how these intersect, how these conflict and how these influence one another. It is an invitation to discuss, to educate and be educated.

Guest contributors and new voices are invited to this blog. Inquiries can be made via the Contact page. 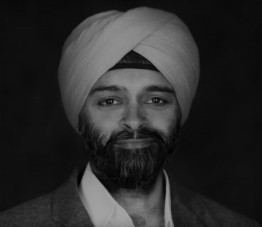 Rupinder Mohan Singh is a Sikh blogger who has written about American Sikh issues for a decade. While maintaining a career in the healthcare industry, he has been involved in Sikh advocacy and activism since 2011, providing educational sessions for companies and organizations about the Sikh identity. He has also engaged in advocacy at the national and state levels, particularly around issues such as employment discrimination, racial profiling, hate crimes, educational standards and bullying. He currently is acting as liaison in northern California for a national Sikh civil rights organization.

Rupinder has been featured in a variety of media outlets including National Public Radio, CNN, Upworthy, Hyphen Magazine, The Huffington Post, The Globe, The Sacramento Bee, The Sacramento Business Journal and numerous other online websites. He has also participated in several podcast interviews about Sikh issues. He was also featured in the Sikh-focused episode of CNN’s United Shades of America with W. Kamau Bell and other television news programs.