A meeting between the city officials of Amritsar and Bakersfield, in Bakersfield, California in January 2010 (photo: bakersfieldsistercity.org)

The California city of Bakersfield, 100 miles north of Los Angeles, has announced that it will associate with Amritsar, Punjab, India as sister cities:

Mayor Harvey Hall will welcome a new city to Bakersfield’s sisterhood at noon [next] Monday in the City Council chamber.

Hall will sign an agreement with Mayor Swaith Malik of Amritsar, India, a city news release said. The relationship has been in the making since early 2007.

Amritsar, a small city in the Punjab state, is home to the Golden Temple, a popular tourist attraction and Sikh holy site.

Bakersfield is no stranger to Sikhs, as the area – dominated by agriculture – is home to many Sikhs who earn their living in that industry.  However, perhaps that familiarity does not go both ways. 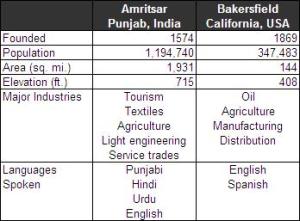 Much more than a “small city in Punjab state” and home to a “popular tourist attraction”, Amritsar is more than three times the population of Bakersfield and covers more than 10 times the area. Being of major religious, historical and cultural significance to Sikhs, followers of the world’s fifth largest religion, Amritsar is most reknown for being the location of Sikhism’s central Gurdwara, the Darbar Sahib (aka the Golden Temple).

The project to associate the two cities was negotiated over several years and involved officials of both cities and the local Sikh community in the Bakersfield area:

I’m sure the Sikhs in the Bakersfield area will take joy in the news that their home is now connected to the home of their religion. More information about the Bakersfield Sister City Project can be found on their website, bakersfieldsistercity.org.