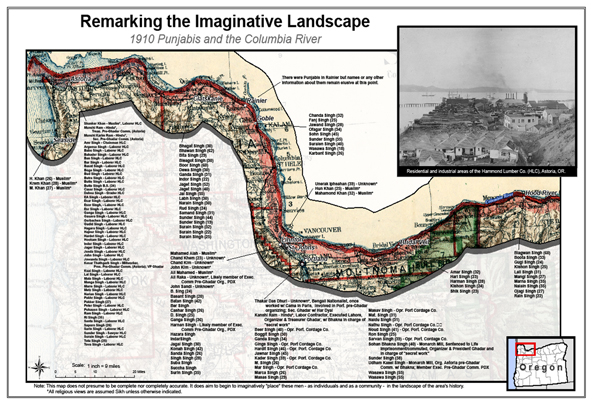 Johanna Ogden, in the Center for Columbia River History, brings together data from a variety of sources to map the Punjabi – and predominantly, Sikh – communities that lived along Oregon’s portion of the Columbia River at the turn of the century. In doing so, she sees evidence of the framing of early Sikh Americans as the “other”:

Historical silences occur through the exercise of shared assumptions and work in devastatingly simple and effective ways. White pioneers are Oregon Country’s first settlers despite large and longstanding Native communities. Logs of “pioneer” names or of local deaths don’t list the name “Singh” despite their having been neighbors or co-workers. Sheriff’s arrest ledgers where “nativity” contrast “American” with Jew, Negro, or Punjabi likewise expose and reinforce a certain notion of belonging. A thousand seemingly benign acts of erasure undergird and feed the persistent myth of Oregon as a white pioneer land. The result is that many of the immigrants whose labor made the American or Canadian West are perpetual outsiders, historical sidebars or simply forgotten altogether.

It is especially tragic that this history is largely unknown by many whose origins are tied to these earliest immigrants. Consequently, Johanna Ogden’s work is particularly valuable.