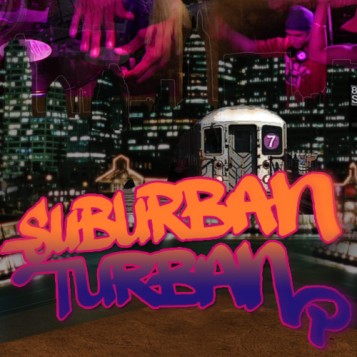 Suburban Turban is a film project currently in pre-production. The story is set in New York and follows a young Sikh man from Queens who searches for a balance between his Sikh and American identities.

Filmmaker Arun Vir was gracious enough to describe the project and tell us more about her background and the movie.

What is Suburban Turban about? Where did you get the idea for this film?

AV: Suburban Turban is a coming of age musical drama about an American born Indian youth who wants to follow his dreams to become a fusion DJ, break free from family traditions, and find his own identity.  I initially wrote the script in response to the hate crimes committed against people from our community after 9/11.  During that period, Indian fusion music had made its way to the US and was pretty much co-opted by mainstream American culture.  I wanted to put that into the story as a tool to discuss cultural tolerance, and diversity – something that was lacking in the US .  The events of 9/11 and the response to it revealed this and I felt there needed to be a way to open up a conversation. Another great inspiration to write Suburban Turban came from a childhood experience.  I had witnessed my own father who is Sikh and had worn a turban when he first arrived in England CUT his hair and discard his turban because of racism and lack of work.  That image of seeing my father shed tears was etched in my mind and as I sat down to write the story I kept seeing him.  My father passed away a few years ago and in some ways I feel I am telling his story and the story of many of our fathers.

What is the process behind making Suburban Turban, and what stage are you in now?

AV: The process is multi-pronged because you have to keep the wheel turning.  We have to build our audience, our fan base so we can go to a distributor and say “look, we have all these folks who believe in this story and want to see it up on the screen”  and at the same time we have to find money and an investor which will attract more investors.  It’s like a chicken and egg scenario, you have to do both.  So, we are the financing stage, casting stage, and building press and audience stage.  We need ONE Angel to step forward who will support us and invest in our film.

Is there anything autobiographical in this film?

AV: Yes there is lots of autobiographical stuff in my movie.  I basically had a very interesting upbringing.  Though my parents were strict my father had his own hopes and dreams and he aspired to be a community leader which he was, so from the start our home was constantly full of people from politics, community groups and religious folks.  I witnessed fights, debates in our house and saw my father take many risks with his views.  Yet, on the other hand my parents tried very hard to maintain a sense of tradition.  This played into my being encouraged to be an individual and yet at the time step into line when I had to. It was hard but I found humor in it at times.   I was a second generation straddling two cultures.  This is the essence of Suburban Turban.

Film-making is not a typical career for South Asians in the west. Can you tell us a little about your story and background? What inspired you to pursue film-making?

AV: You’re right about that!  I can still remember the day I declared my plans to my parents to leave home to be a filmmaker.  My father and I got into a big fight/argument and I was literally threatened with being ostracized if I chose that path.  Of course I chose that path, and paid for it dearly.  My relationship with my parents was typical, and now as a parent myself I understand we all want the best for our children but my parents were tough on us and so being a dreamer as they called it was not going to pay the bills.  But, the irony is that I was raised around Bollywood movies, and while others were watching British movies, which I have a great fondness for, I was watching American westerns… and so I had this great canvas of Indian musicals, and American dramas to inspire me.  I knew then I wanted to create the images I saw.  I wasn’t sure how but I wanted to know more and so I started reading books on filmmaking.  When I eventually left home, my first real job was in network television working on news documentaries in London.  It was my first step to working with the visual medium.  I’ve taken many risks in my life to do what I love to do, sometimes at the cost of being comfortable, having a regular paycheck, being distant from family.  I know I’ve just kept moving forward  — I was never going to be happy to stay in one place.  I knew that from the start.  The more I learned, the more I wanted to know.  I have a great admiration for writers and storytellers and so I read scripts from an early age and was inspired to want to tell stories.

Has the shooting at the Gurdwara in Oak Creek, Wisconsin changed your perception of the project?

AV: When the shooting occurred in the Wisconsin, my phone kept ringing, and I got emails… everyone said this is the time for your story, this is why you must tell this story.  The incident didn’t change my perception, but made it feel more urgent.  It was very emotional for me to see this kind of thing happen in a temple, a place of worship.  That someone could plan to kill people just because they looked different.  But this isn’t anything new, you can google any day of the week and you’ll find many stories of hate crimes particularly against turbaned men and people from our community.  I think the culture of ignorance after 9/11 grew immensely.   This is precisely why we need Suburban Turban.  We need a continued dialogue about tolerance in the US.  Gun violence and mental illness are dangerous combinations but we need early intervention, we need tolerance and cultural awareness built into our education system.  The story is more important because we have a generation of American born South Asians in the US who strive to fit in and yet hold onto their culture and traditions.  There are so many great things to celebrate about being Indian American – our youth are influencing music, fashion, art, technology and I think we need to put that on the American map and world stage.

What other projects have you been involved with?

I have been involved with a variety of projects ranging from documentaries, shorts, features, and TV.  Two years ago I had the pleasure of working as coordinating producer on “Freedom Riders” which was nominated and won 3 Emmys.  In my earlier years I worked on numerous documentaries around social issues which interest me the most and I’ve produced TV, viral corporate video to make a living from time to time.  I have written, directed and produced several shorts and a feature film in NYC.   I am a recipient of the “Directing Workshop for Women” program the AFI.

What do you like to do when you aren’t working?

AV: I am always working!  I am always trying to do something to move forward with my film.  Unfortunately this is a tough road and I have to keep the wheel turning.  There are days when I just want to be still and not even get on the computer, but I know that I have to make my film… I am a parent of two children, one of them, Shailen is  11yrs old.  He’s a very busy guy, sports, activities and so I run from place to place with him.  My daughter, Salma, is an artist and finishing college.  I am an Adjunct Professor at Occidental College and teach producing in the Fall.  I watch a movie practically every night and try to write screenplays, which I love to do, but the time is always so limited.

What are some of your favorite films?

AV: Smile. I have so many films in all kinds of categories I can say are my favorites.  Indian classics as Satyajit Ray’s APU, Umrao Jaan, Pakeezah, Awara, Cholay, Salaam Bombay, Guide (I would love to remake), Monsoon Wedding, Such A Long Journey, I could go on and on…. I love film noir, drama and westerns, Shane, Big Country, DOA, Night of the Iguana, Giant, Magnificent Seven, Grapes of Wrath, In the Heat of the Night, The Birds, She’s Gotta Have it,  I enjoy big action movies, The Rock, Bridge over the River Kwai, Terminator, Predator.  Dramas about identity… Saturday Night Fever, Do the Right Thing, Whale Rider…and more…

Where can we learn more about your work, and of Suburban Turban?

Many thanks to Arun Vir for taking the time to share more about the film and her work. Best of luck in this project and hope we will have the opportunity to see Suburban Turban on the big screen in the near future.