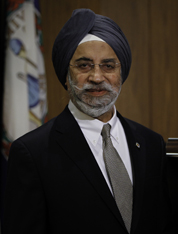 The mayor of Charlottesville, Virginia, Satyendra Singh Huja — a Sikh American — has called for prayers to commemorate the city’s legacy as the origin of the concept of religious freedom in America:

In a surprise letter sent to all churches, temples and centers of faith in the greater Charlottesville area, Mayor Satyendra Singh Huja has called for prayers of thanksgiving to mark the 250th Anniversary of Charlottesville Virginia this weekend.

Charlottesville is considered by many to be the birthplace for religious freedom in Virginia and the USA for it was here that Thomas Jefferson penned the documents that eventually became the First Amendment of the constitution which guarantees freedom of religion, press and speech in the United States.

The mayor invited pastors and leaders of the religious community to join him on Monday, November 12 for a Community Faith and Heritage prayer breakfast at the Omni Hotel to begin the actual day of commemoration.

…“Since Thomas Jefferson and the founders of Charlottesville envisioned a community where there would be no state church but freedom for all to worship God as their conscience dictated, it is fitting that we should gather and thank God for His blessings on our city for these 250 years,” said Mayor Huja. His is a practicing Sikh, and embodies the plurality and diversity of worship in Charlottesville.

What also adds to the significance is that a Sikh American mayor is encouraging the celebration of the concept of freedom of religion, which, while it is a part of Charlottesville’s legacy, is also that of the Sikh faith as well.