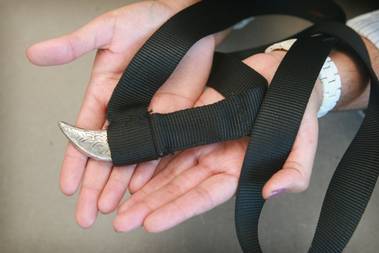 “Jurupa school board members on Monday, Nov. 19, discussed safety issues on campus, including a request by some Sikh students to bring ceremonial kirpans to school.” (source: Press-Enterprise)

In southern California, the Board of the Jurupa Unified School District recently enacted a provision allowing Sikh students to carry a kirpan — a sword or blade that is an article of the Sikh faith — on its school campuses:

Under the new policy, parents agree to sign a statement that requires the kirpan — a daggerlike object that is a sacred article of faith — to be worn under clothing, to have the blade dulled, to be soldered or sewn into its sheath so it cannot be removed and to have a blade that is 2 1/2 inches or less.

The issue arose when a student made it known when school began that he/she wears the kirpan as part of religious practice:

Birpal Kaur, who heads the West Coast office of the Washington, D.C.-based Sikh American Legal Defense and Education Fund, said the matter came up after a Patriot High School student told a teacher during registration that the student would wear the kirpan for religious reasons.

According to Superintendent Elliot Duchon, the Sikh families have made concessions in order to accommodate security concerns related to the kirpan, of which none have been reported:

At least three high school students in the Jurupa Unified School District will be allowed to wear the approximately 2-inch knives at school after their parents agreed to solder them or sew them into the sheaths so they cannot be used as weapons, Superintendent Elliott Duchon said.

…Duchon said there have been no complaints or violence involving kirpans at local schools.

As an article of the Sikh faith adopted in 1699, the kirpan is one of the “five K’s” for Sikhs who have been initiated into the Khalsa order (by way of an initiation ceremony called Amrit Sanchar) — the other four being the well-known uncut hair (kes) and steel bracelet (kara), as well as a comb (kangha), and a specific type of undergarment (kachera).  The turban, as the head-covering, is also a recognized article faith.

There is no hierarchy among these articles, and the responsibility for the initiated Sikh to wear each of them is equal. While we often hear about discrimination of Sikhs based on their uncut hair and the turban, as we see in the case of the Jurupa Unified School District, the kirpan presents a very different and complicated issue.

The kirpan is an expression of core values of the Sikh faith, and Khalsa Sikhs are obliged to wear the kirpan under a very specific mandate:

The Kirpan is a religious sword that encapsulates an initiated Sikh’s solemn obligation of courage and self-defense. It denotes dignity and self-reliance, the capacity and readiness to always defend the weak and the oppressed. It helps sustain one’s martial spirit and the determination to sacrifice oneself in order to defend truth, oppression and Sikh moral values. All Initiated Sikhs are mandated to wear a Kirpan on their body.

Indeed, given the nature of this article of faith, we often see the right to religious freedom confront appreciable concerns about safety. While Sikhs are as much concerned about safety as it relates to the kirpan, as an article of faith it is one of our most difficult issues to reconcile with public perception.

For one school board member in the Jurupa Unified School District, his sole dissenting vote on the provision to allow the kirpan was his concern for safety:

…[School board member Brian] Schafer said that type of object does not belong on a school campus.

“My issue is safety, not that you’re going to deny someone’s religious freedom,” Schafer said.

…Schafer is adamant that student safety trumps religious freedom and that a dagger-like object should be not allowed on campus under any circumstances.

However, he was outvoted by a 4-1 margin:

But other board members insisted that the district had to respect the religious beliefs of the students.

“America was founded on freedom of religion,” said board president Sheryl Schmidt. “It’s not up to us to tell any religion what is right and wrong.”

Often, the kirpan is described as a “symbol” of the Sikh faith, and perhaps this has made it more palatable to those who might be more averse. However, in my view, the kirpan is not simply an ornament to signify a belief, but an instrument with which we are to fulfill our duty as Sikhs. Therefore, it is reassuring that the parents and school administration could work out a compromise to balance both sides of the issue.