Sikh-themed applications (apps) are establishing a presence in the world of smartphones and tablets. Most of the apps currently available are associated with providing access to Gurbani (hymns in the Guru Granth Sahib, the Sikh sacred scripture) — either as a reference that can be stored on a mobile device, a translation reference, or as a means to listen to recordings. Increasingly, these apps are replacing traditional hard copies of Sikh scriptures during worship services.

There is also a movement to provide educational resources using smartphones and tablets. On the Android platform, two Sikh-themed games for children are available for free. I’ve downloaded each on my Motorola Droid RAZR smartphone and provide an overview of each below. The photos included below are screen captures from my device. 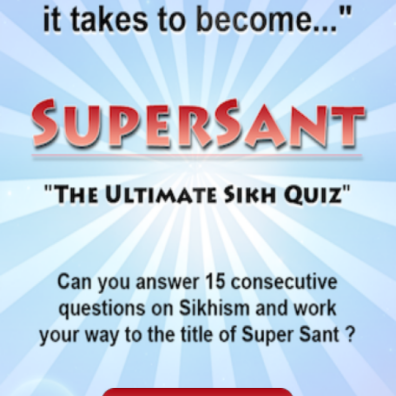 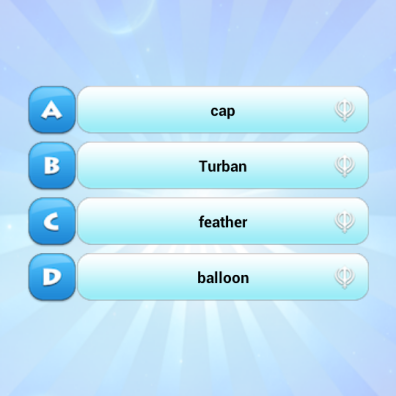 SuperSant (“super saint”) by Share Charity was released in mid-2011 and developed by the people behind the website SikhiToTheMax (which provides an online searchable index of the Guru Granth Sahib with translations). This game takes the form of a game show quiz (similar in format to the game show Who Wants to Be a Millionaire?). The objective is to answer 15 consecutive multiple-choice questions to reach the status of “Super Sant”. Much like the game show, there are “lifelines” to obtain hints to the questions: “50/50” (which eliminates two of the answer choices), “Ask 100 Punjabis” (a fictional survey of the most popular response), and “Phone a Pandit” (a Hindu priest who offers a suggestion for the right answer). The lifelines are associated to various concepts that are explained more fully in the instructions for the game: partial commitment to the Sikh faith, being Punjabi versus being Sikh, and the influences of Hinduism on the Sikh faith.

There are some elements in this app that some could find offensive. The “Phone a Pandit” option provides names of a Hindu priest such as “Pandit Kuch Nahi Pata” (“Doesn’t know anything”) or other names that mock those who use the title of Pandit. In my mind, this type of characterization can be seen as disrespectful to those of other faiths, and perhaps such treatment is better left out of a game for children.

The user begins by selecting the answer to a question from among four options. The game confirms whether the user answers correctly, and if not, the correct answer is provided. The game also tracks the user’s stats: Total questions asked, total correct, total time taken, numbers of lifelines used, and number of SuperSant Titles achieved. The user can also share their times on Facebook to add an additional competitive element.

There is a lot of information provided to the user in this game, and by answering questions, the user learns about Sikh history, concepts and practices.

For Android-based devices, SuperSant can be downloaded from the Google Play Store. It is also available for iPhones and iPads from iTunes. 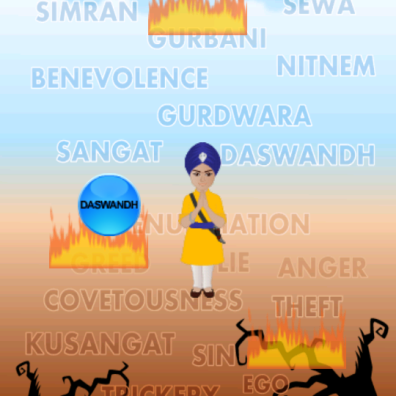 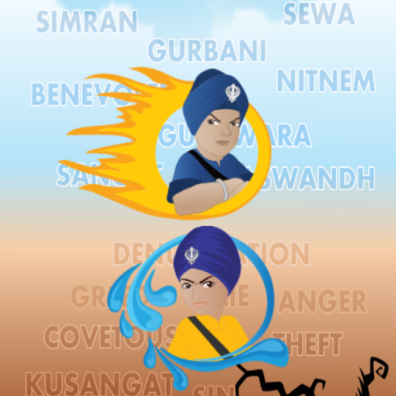 The Sikh concept of maintaining high spirits and optimism is called chardi kala, and this is the namesake of a new game by Vismaad (a production house that produces animated films based on Sikh history). In contrast with SuperSant, ChardiKala is an arcade-style game framed with Sikh terms and context. The point of the game is to move a character (a Sikh boy or girl) to the top of the screen (to “Chardi Kala” as it were). The character elevates towards Chardi Kala if the user presses randomly appearing circles fast enough. If not, the character descends towards “Dhendi Kala” — a negative space. The user must also navigate away from hazards at the bottom and top of the screen (depicted as fire), which is accomplished by tilting the screen left or right to maneuver away from the obstacles.

Within the each circle that appears on the screen is a word that is connected to a concept within the Sikh faith — for example, seva (service) or daswandh (donation of a tenth of one’s income). Score is recorded as “Waheguru Simran” (“remembrance of God’s name”) points, which tracks how many circles the user has pressed before touching a fire hazard or dropping to the bottom of the screen.

The user has the option of selecting a boy or girl as a character in the game, and can choose between English or Punjabi as the preferred language.

As an arcade game, it is certainly a smooth-running app. The game offers enough of a challenge at the beginning to keep the user interested. However, on its own, ChardiKala could just as easily be played without gaining any understanding or knowledge about the concepts (and indeed, the circles flash on the screen so quickly that there isn’t a lot of time to read what is on them), and there isn’t a framework within the game to educate the user. In this sense, the app is deficient as a means to educate children, and I would suggest that some reinforcement/guidance by a parent is warranted if education is a goal. However, ChardiKala does have a fun factor that provides an exposure to a variety of Sikh concepts and terminology.

ChardiKala is available for download for Android devices at the Google Play Store.