“In about 18 months from now, hopefully he’ll have sent Nikki Haley back to wherever the hell she came from.”

Nikki Haley, who has been discussed often on this blog, comes from a Sikh American family and later converted to Methodist Christianity. During her campaign for the governor’s seat, she regularly touted her Christian credentials. 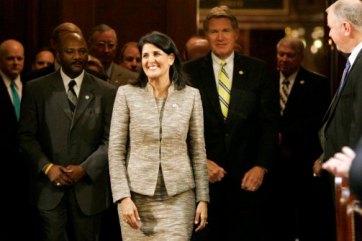 “South Carolina Gov. Nikki Haley enters the State House chamber in Columbia to give her State of the State address in January. Democrat Dick Harpootlian has told activists to “send Nikki Haley back to wherever the hell she came from.” (Mary Ann Chastain/AP)” (source: The Daily Beast)

Despite not identifying as a Sikh (and in once instance, not even as Asian), she has often been met with such questionable remarks, having been once called the “Sikh Jesus”, asked if she gives larger tips to Sikh cab drivers, and slurred with the epithet of “raghead”.

On The Daily Beast, Peter Beinart takes note of the muted response to Dick Harpootlian’s comments from members of the Democratic Party, and suggests that had he been a Republican, there would have been much more outrage.

In politics, bigotry isn’t always connected to ideology; sometimes it simply stems from opportunism. And with more minority Republicans seeking high office, Democrats will have more opportunities in the years to come.

Our society is clearly not a post-racial one when bigotry can be seen as  opportunity.