When I was a child, the mere singular mention of the word “Sikh” on a television show only strengthened my bond with a science fiction franchise that I maintained through its incarnations in film and television for decades.

In 1967, the science fiction television show Star Trek introduced a new character named Khan Noonien Singh, who, according to Wikipedia, is “a genetically engineered superhuman from India who once controlled more than a quarter of the Earth during the Eugenics Wars of the 1990s.” This unusually named character — with a Muslim surname as his first name and a Sikh surname —  was identified by a historian during the episode as “probably” a Sikh man from northern India:

Other than his darker skin and last name, the only other evidence of this character’s ethnic origin that is presented to the audience to support the historian’s conclusion is a watercolor painting (as above) depicting Khan Noonien Singh in a Sikh-style turban. Thus, the identification of Khan Noonien Singh in this way became significant, especially to me as a child who would watch Star Trek re-runs religiously during the late 1970s and into the 1980s.

Played by Mexican actor Ricardo Montalbán, the character would appear again fifteen years later as the main antagonist in the movie Star Trek II: The Wrath of Khan (which, as a child, was one of the few movies I remember watching in a theater).

The selection of the name Khan Noonien Singh was not random. In fact, Star Trek creator Gene Roddenberry had another purpose for this character that was beyond the television show:

During World War II, [Gene Roddenberry] had a friend named Kim Noonien Singh; after the war Kim disappeared, and Gene used his name for some characters in the Star Trek series (Khan Noonien Singh from Star Trek II: The Wrath of Khan (1982) and Noonien Soong from “Star Trek: The Next Generation” (1987)) in hopes that Kim might recognize his name and contact him.

Gene Roddenberry would never hear again from the real Noonien Singh despite his use of characters with a similar name to somehow elicit contact from his long lost friend.

Fast forward to today, the latest extension of the Star Trek franchise, called Star Trek: Into the Darkness, opened this week in theaters across the country. In this second film of the modern-day reboot of the franchise, Khan Noonien Singh has reappeared as the chief antagonist, and as with the rest of the cast, is much younger than his previous incarnation from the original series or as in Wrath of Khan. However, unlike previous movies, the new Khan Noonien Singh is a white man, played by actor Benedict Cumberbatch.

This surprising turn of events did not escape notice of the website RaceBending.com, who see this revision of the character as part of a general trend to “whitewash” characters in television and film. Blogger Marissa Sammy goes on to express disappointment with the rebooted Khan Noonien Singh:

It’s disappointing and demoralizing that with the commercial power of Star Trek in his hands, JJ Abrams chose not to honour the original spirit of the show, or the symbolic heft of the Khan character, but to wield the whitewash brush for … what? 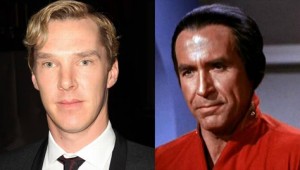 Certainly, Star Trek has never been without diversity in its casts of actors, but this change appears significant. On the other hand, perhaps not casting a South Asian or brown man as a genocidal villain has a silver lining for those of us who fight stereotypes about our ethnicity every day, but if this is so, it tells us about the state of race relations in this country.

And, perhaps the significance of the diversity displayed on Star Trek was only so to those for whom representations about diversity in depictions of the future was important. However, when this diversity is so easily shed, one wonders about the implications and the messages sent to young audiences who look for signs of validation and acceptance by the mainstream.