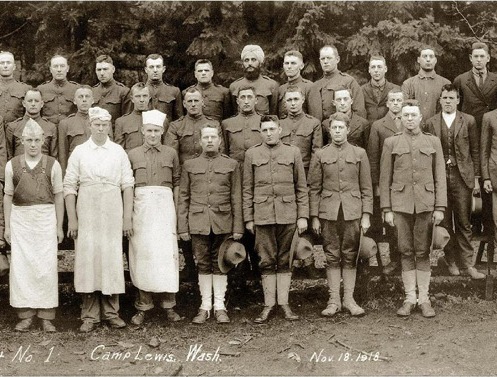 Bhagat Singh Thind as a member of Company No. 2, Development Battalion No. 1, 166th Depot Brigade, of Camp Lewis in Astoria, Oregon. (Source: bhagatsinghthind.com)

Rajdeep Singh, of the Sikh Coalition, writes in The Hill about the irony wherein observant Sikh Americans are prevented from serving in the US military today, when almost 100 years ago, an observant Sikh served in the US Army but was denied the right to be considered as an American:

Although his [right to citizenship] challenge was rejected by the U.S. Supreme Court in 1923 on the ground that he was not a “white person” under those laws, another American institution had welcomed [Bhagat Singh] Thind only a few years earlier during World War I – the U.S. Army.

As ironic as this double standard was during his lifetime, it is even more ironic that Bhagat Singh Thind today would be presumptively prohibited from serving in the U.S. Armed Forces with the turban, beard, and unshorn hair mandated by his faith.

Read more at The Hill.