In commemoration of the 30th anniversary of Operation Bluestar in Amritsar, India, in June, 1984, and the anti-Sikh pogroms that took place the following November in New Delhi, Lori Way continues her series of essays discussing works of literature focusing upon these events. You can read the first article in her series, in which she discusses Amandeep Sandhu’s Roll of Honour, here.

Many Americans spent this past weekend celebrating the Fourth of July, jubilantly retelling stories of how our nation gained its independence. When Frederick Douglass was asked to speak on the subject in 1852, however, he expressed a different perspective of what the day represented. Douglass asked, “What, to the American slave, is your 4th of July? I answer; a day that reveals to him, more than all other days in the year, the gross injustice and cruelty to which he is the constant victim” (qtd. in Zinn 117). Douglass’ words remind us that the facts we take for granted about historic events are often based upon one point of view.

Literature, through the contradictory stories it tells, also plays an important role in the formation and re-formation of a country’s cultural memory. Steven Trout’s argument in On the Battlefield of Memory describes this in relation to conflicting American accounts of World War I, calling these recollections “fractured and unsettled, more a matter of competing versions of memory – each with its own spokespeople – than a single, culturally pervasive construction of the past” (2). Public perceptions of the events that happened in India during 1984 reflect a similar spectrum of variance. Many works which recount the horrors of that time are the result of a writer’s personal perspective, beliefs, and interpretation of the facts. 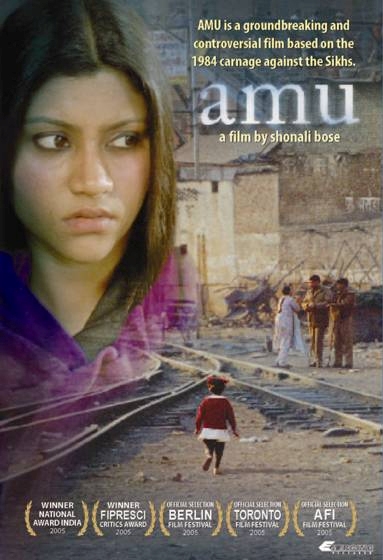 Shonali Bose, a Hindu author and director, hopes that her voice will expand the discourse surrounding the events of 1984 to include one aspect that often goes unnoticed – the role of Hindus who aided Sikhs during those violent times. She has done this through her first feature film, Amu, which was also the basis of her 2004 novel of the same name. The protagonist of Bose’s story is Kaju Roy, a girl who was adopted at the age of three. A Hindu woman (Keya) raises her in the United States, but Kaju’s interest in her own biological background increases as she becomes an adult. Despite the initial objections of her adoptive mother, Kaju vows to make a trip to India after graduating from college so that she can learn more about her heritage.

Kaju’s journey slowly reveals that her parents had not died in a malaria epidemic, as she had been told as a child. She begins to learn about Operation Blue Star as well as the anti-Sikh riots that took place in Delhi. Facts are brought to light through her research as well as the stories told to her by those who lived through the violence. Each storyteller has his/her own perspective; some are willing to share what they know and others are not. This new information affects how Kaju views her personal history as well as the history of India. She also feels betrayed by Keya and confronts her: “Mom, after everything you’ve taught me. Everything you’ve ever stood for. Since when is hiding something the right thing to do?” (Bose 88).

Keya is hesitant to tell Kaju about the circumstances surrounding her adoption, but she does offer Kaju some insights regarding how she perceived the 1984 riots. Rather than placing blame with any particular religious faction, Keya explains that “The question to ask is not really who is guilty but who benefits from this kind of conflict” (Bose 107). This reflects Bose’s own experiences of interacting with Sikhs who were victimized in the attacks. She writes in the appendix of her book that she was a student at Miranda House College in Delhi University when the anti-Sikh riots were happening. Bose recalls, “When the massacre of Sikhs took place in November 1984, I, along with other students and some of our teachers, worked in the relief camps” (137). Bose mentions the work done by the History Department at Miranda House in her novel, along with the relief efforts of “hundreds of people all over the city” who provided aid when the government would not (127).

Bose, through Keya, guides the reader to examine what is known about the events of 1984 and how those accounts are transmitted to the public. She asks her audience to look beyond individual acts of violence in the streets in order to focus on other factors that she believes were responsible for the overall tragedy. Keya states in Amu that “one of the first things that victims call for after riots is, always: increase State power. Bring in the army. But it’s really the State that caused the violence in the first place” (Bose 107).

Eventually, Kaju finds out that the reason why the songs of the Bangla Sahib Gurdwara sound vaguely familiar is because she had once been a part of a Sikh family. Keya confesses that she had been a worker at a relief camp during 1984 and had adopted Kaju after the death of her mother. Kaju hears the gruesome details surrounding the demise of her family, and learns her real name – Amu.

Bose’s motivation for making the film and writing her novel was to acknowledge those who chose to help Sikhs despite religious differences: “I came across many young Sikhs who knew only one side of the story. And it was terribly important for me to correct that version” (qtd. in Pais). Amidst the accounts of violence between various factions, one may overlook those unsung heroes whose service to others was not based upon a common religious or ethnic heritage. The message found in Amu is that historical truth has many layers, and we must be willing to seek out those voices that are absent from the dialogue. Bose not only shines the light of awareness upon what Sikhs went through in 1984, but also celebrates the courage of everyday people whose commitment to human rights extends beyond their own communities.

Bose’s novel works well as a stand-alone piece or as a companion to her film. Both are available through Amazon.com. Order through Amazon Smile and a portion of your purchase will go to a charity of your choosing.

You can also learn more about the film on its official website:

Trout, Steven. On the Battlefield of Memory: The First World War and American Remembrance, 1919-1941. Tuscaloosa: U of Alabama, 2010. Print.