In commemoration of the 30th anniversary of Operation Bluestar in Amritsar, India, in June, 1984, and the anti-Sikh pogroms that took place the following November in New Delhi, Lori Way continues her series of essays discussing works of literature focusing upon these events. You can see her entire series here.

“A deep depression enters my soul. I ask myself over and over again, am I Sikh? I am certainly not the Bhindranwale brand nor the gurdwara Bhai brand….I cannot remember when I last went to a gurdwara. I have not prayed in fifty years….On the morning of the 6th of June I go to the gurdwara behind my apartment. There is quite a crowd. Many are in tears.

Their tears bring tears to my eyes. I am one of them.” 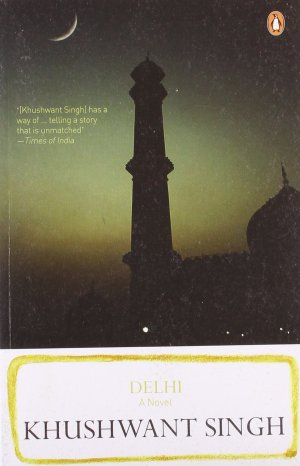 Cover of Delhi: A Novel, by Khushwant Singh. (Photo: Amazon.)

Many Sikhs living in the United States, especially those who are too young to recall 1984, may feel disconnected with the violence that took place in India during that time. It remains merely a history lesson for these individuals, an unfortunate series of events in a distant country. Like Khushwant Singh’s narrator from Delhi: A Novel, they may never appreciate the magnitude of this tragedy until they can share in the experience with the victims.

Delhi became an epicenter of anti-Sikh pogroms after the assassination of Indira Gandhi; estimates of those killed range in the thousands. What was it like for those who actually lived through this frightening period in India’s history, and do the words of authors like Khushwant Singh portray the reality of the situation? Singh was living in Delhi in 1984, and his novel provides a semi-autobiographical recollection of the violence he witnessed throughout that year. The novel’s protagonist reflects upon the Golden Temple raid and his own place within the Sikh community. He also observes a brutal Delhi riot:

The mob is composed of about fifty young boys armed with iron rods. Some have canisters of petrol in their hands. They surround the gurdwara and storm in. They drag out the Bhai and beat him up with their fists and rods. He cries at the top of his voice: “Bachao! Bachao! Police!” They shout back. “Bhindranwale key bacchey (son of Bhindranwale)! Ask your father to save you now.” They bring out the Granth, its canopy, carpets and durries, heap them up in a pile and sprinkle petrol on it. One puts a match to it and the heap bursts into flame. The Bhai’s hair is scattered over his bloodied face but he pleads, “Do what you like to me but don’t dishonor the holy book. Rab da vaasta (for God’s sake).” (Singh, Delhi: A Novel 388)

The assault escalates, and the crowd decides to burn the man with his holy book. As flames engulf the body, the crowd declares “Indira Gandhi amar rahey (Indira Gandhi is immortal)” (Singh, Delhi: A Novel 388).

Singh, who passed away on March 20, 2014 at the age of 99, was known as one of the most popular authors of Sikh background despite the fact that he publicly espoused an agnostic stance in his later works. A political figure within India as well as a prolific writer, Singh’s other books include A History of the Sikhs, a two-volume work which has become an important reference within Sikh scholarship. His accomplishments garnered him the honor of the Padma Bhushan from the Indian government in 1974, yet he returned the award in protest after the attack on the Golden Temple. He recalled in a 2004 essay that “I felt like a Jew must have in Nazi Germany. I was a refugee in my own homeland because I was a Sikh” (Singh, “Oh, That Other Hindu Riot of Passage”).

Singh’s literary depictions of 1984’s events seem consistent with stories told by eyewitnesses, as documented by the 1984 Living History Project. This ongoing project seeks to videotape and archive as many stories as possible from individuals who lived through the attacks. In an effort to reach a wider audience, the project’s staff has provided several interviews presented in English or with English subtitles. One such interview is with Balwinder Kaur, who was 15 years old and living in Delhi at the time of the attacks. Kaur describes her recollections of the destruction that happened in her neighborhood, including the desecration of a gurdwara similar to what Singh describes in his novel:

A large disturbance could be heard all night. A great deal of violence and beating occurred there. We spent the night awake as we were also concerned that we could be attacked because they had destroyed our community and burned our [gurdwara] during the day. The neighboring community was being massacred at night so we didn’t think that we were going to survive, as so much had already happened to us. (“Balwinder Kaur”)

Kaur also describes how the mobs, which came as “a train full” into the city, attacked her father, and “beat him like dry corn is beaten to dislodge the kernels” (“Balwinder Kaur”).

Kaur’s account corroborates Singh’s view of 1984’s events as portrayed in Delhi: A Novel, yet Singh’s version comes at the end of a dizzying adventure that takes the reader through Delhi’s history beginning in the year 1265. It is a raw intersection of humor, violence, and eroticism which includes the details of the protagonist’s relationship with a hermaphrodite lover. Singh writes in an author’s note at the beginning of the book that “History provided me with the skeleton. I covered it with flesh and injected blood and a lot of seminal fluid into it. It took me twenty-five years to do so” (Singh, Delhi: A Novel ii). It would be easy to dismiss Singh’s depictions of these events as the far-fetched creations of a gifted writer were it not for the documented descriptions presented by Kaur and others. The stories of both Singh and Kaur offer a glimpse to the rest of the world of what really happened, and how those events impacted their lives forever: “It’s not like watching a movie that you see once and then it ends,” says Kaur. “Every day we recollect 1984. For us, the reel of memories keeps spinning, it will be like this till we perish” (“Balwinder Kaur”). New audiences as well as future generations are indebted to the contributions of those who, like Singh and Kaur, have been willing to share their stories of what the Delhi Sikhs have endured.

The 1984 Living History Project is hoping to expand its impact and is looking for volunteers who might be willing to translate its video interviews into other languages. You can learn more about the project at this website.

Delhi: A Novel is available on Amazon.com. Order through Amazon Smile and a portion of your purchase will go to a charity of your choosing.