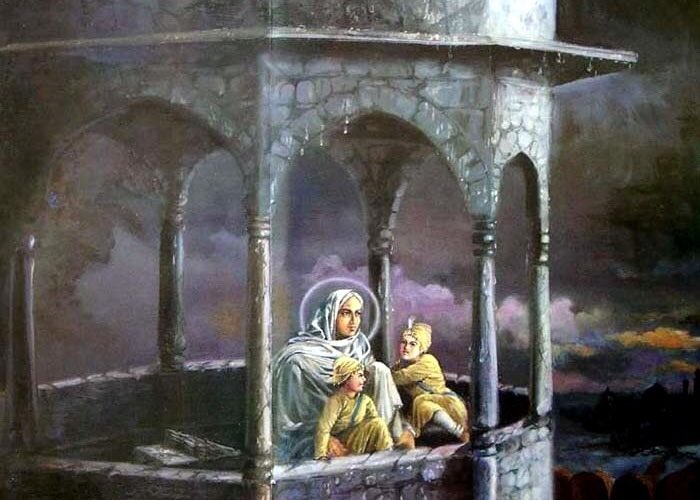 The Sikh prayer called Ardaas (link) is an address before the All-Pervasive Immortal that is offered regularly by Sikhs in congregation. It concludes every service and is often offered ahead of an undertaking of a task by Sikhs to seek the Divine’s blessings and protection.  The prayer is a defined set of verses that recounts Sikh history: the Gurus, those who sacrificed themselves, and custom verse at the end by the congregation specific to the context of the occasion. The Ardaas places what we do in the context of our Guru’s teachings and in the legacy of those who came before us. What we do today is a continuation of their legacy.

One line of Ardaas has stood out in my mind in recent weeks:

The verse commemorates the four sons of the tenth Guru, Guru Gobind Singh (his sons are collectively known as the Sahibzade). The boys were martyred in 1705 during the conflicts with the Mughal Emperor of India and the Hindu hill rajas. The two elder sons died in battle against the Mughals. In escaping the fighting, the two younger sons —  Sahibzada Zorawar Singh (age 9) and Sahibzada Fateh Singh (age 7) — and their grandmother, Mata Gujari, were betrayed by their attendant and brought to the Mughal governor, Wazir Khan.

The imprisoned younger sons of Guru Gobind Singh refused overtures by the Mughal governor to convert to Islam.

Wazir Khan, who sought to bring an end to Guru Gobind Singh and the Sikhs, imprisoned the Guru’s mother and two sons at the top of an open tower with few provisions in the middle of winter. To deliver a blow to the Guru, Wazir Khan attempted to cause the boys to renounce the Sikh faith and convert to Islam. Over several days, he attempted the lure the boys by offering comforts and riches as an escape from their torturous imprisonment, but the two boys adamantly refused. Each evening, they returned to the comforts of their grandmother’s lap in the tower. Finally, when these tactics didn’t work, the Governor threatened the children with death, but they still refused to renounce their faith.

Despite attempts by local Muslims to intercede, Wazir Khan ordered the boys’ execution. The means of execution — to be bricked alive — was designed to terrorize the children once more into renouncing their faith. As the walls were built up around them, they remained steadfast in their determination. Ultimately, the boys were sealed alive in the bricked enclosure and breathed their last. On hearing this news, Mata Gujari also passed away in the cold tower.

A Gurdwara, Fatehgarh Sahib, now stands at the spot of this travesty in Sirhind, Punjab. The spots where the boys were martyred, the tower where the three were imprisoned, and where their bodies were ultimately cremated are all commemorated, and their story, as evidenced by Ardaas, inspires Sikhs of all ages until this day.

I recount this story because the images of imprisoned migrant children sleeping on floors, locked in cages, being separated by government officials from their parents and the sounds of their cries in detention serve as a stark reminder of events in our own history. The abuse of children as a means to a political end by oppressive governments is not acceptable nor new, but Sikhs have an intimate connection with this in our history. I find it difficult as a human being and as a Sikh to stand by and watch this travesty continue. If we Sikhs truly remember our history as we invoke in Ardaas, we must also take a stand.

As in last line of Ardaas:

Nanak, in Naam may we remain in high spirits
By Your Will, may the entire world prosper.