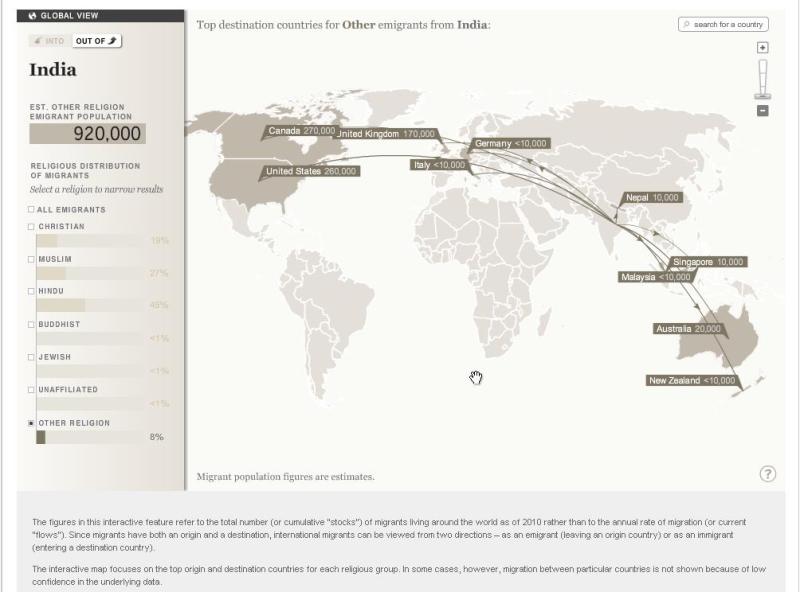 The title of this post is a cheesy reference to the Neil Diamond song “America“, but the song came to my mind after I explored the latest report from the Pew Forum (a research think-tank that studies religious trends in the US and globally) entitled Faith on the Move: The Religious Affiliation of International Migrants. This report provides estimates of migration of people around the world, categorized by their religion, during 2010.

Research studies published by the Pew Forum have always been of interest to me, despite the fact that they typically don’t identify or quantify Sikhs as a separate category. Usually, Sikhs are relegated into catch-all categories of unrelated (culturally, geographically, theologically) faith groups. This has been a little frustrating.

However, after some correspondence with the lead researcher behind the Faith on the Move report, I learned of the limitations that the Pew Forum is dealing with in tracking Sikh populations around the world.  In the case of this new report, the research was based on census data and other studies from a variety of countries in which Sikhs are not consistently or commonly identified as a separate category.  Accordingly, the Pew Forum was only able to report on the data available to them, and while they expressed a strong desire to explicitly count Sikhs (as they recognized that the Sikh diaspora is an important part of our history), the data available doesn’t allow them to do so (and, on a side note, this is what makes projects to have Sikhs counted separately in the US census more necessary).

Notwithstanding the above, I thought it might be a valuable exercise to see what information could be ascertained from this report and from its online tool that might shed any light on Sikh migration around the world.

As Sikhs originate in India, and given the limitations in the study, the closest we can come to identifying Sikhs in this report is to look at the “Other” group that emigrates from India, and to see where this group is going.  This “Other” group from India excludes those who identify as Hindu, Muslim, Christian, Jewish or who express no religious affiliation.  It would include Sikhs, Jains, and other faith groups that are not explicitly categorized.   Sikhs would likely be the largest of this “Other” group, given that they are the largest population outside of the aforementioned categorized religious groups.

For this “Other” group from India, the report estimates:

From these estimates, it appears that an almost equal number of people in this group are emigrating from India to Canada and to the United States, and both combined comprise 60% of emigration of this group from India. This is interesting considering the higher profile that Sikhs have in Canada.

It is difficult to say exactly how many of this Other group from India are Sikhs, or if the distribution of Sikhs to non-Sikhs is equal among destination countries from this group. Sikhs are likely the more numerous people in this category (they are more numerous in the general Indian population than Jains or other religious groups that might fall in Other). Conservatively speaking, if Sikhs made up even a full third of Other, then by extrapolation, according to the report’s data, 86,000 Sikhs from India emigrated to the United States in 2010.

This is a large number coming to America, as Neil Diamond would sing it,  considering that the population of Sikhs already residing in the United States is commonly reported to be in the half million range. If the resident Sikh population is 500,000, then in 2010, we saw an increase of 17% in one year alone, which is a high rate of increase and does not include Sikh immigrants to the United States from other countries, or the growth rate of just the resident Sikh population.

Perhaps, what we can conclude from this study as it pertains to Indian Sikh emigration to the United States is that:

Most certainly, the report raises more questions than answers. The biggest question is about how Sikhs as a community in the US can get a better handle on our demographics in this country.  We don’t know enough about our community relative to the American landscape, other than that we’re here and we keep coming to America.