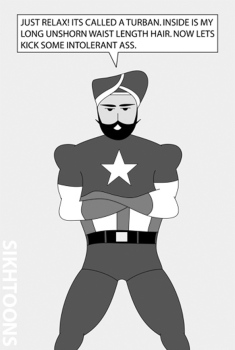 A rendition of “Captain America” as a Sikh, by cartoonist Vishavjit Singh (source: Seattle Times)

In an interview on NPR, editorial cartoonist Vishavjit Singh, of sikhtoons.com, discusses the backlash he received after he wrote an opinion piece proposing the concept of a Sikh superhero that fights hate crimes:

I did not expect – I mean, I am used to critique. As an editorial cartoonist, I’m used to that. I’m actually even used to threats to my life at times, because I do very hard-hitting political cartooning. But this piece, I think what happened is people did not – you know, bad readers, that’s one, because my premise was stated very early on in the article.

But then what is interesting is people really picked up on the race issue. A lot of these people who commented online did not like the notion that I was talking about a new superhero who happened to be not white. I had friends, I had fans, I had family who were calling me in and saying, hey, is everything OK? I mean, this is not what, you know, you would expect.

How ironic that proposing more ethnic diversity in our popular culture actually brought out the hate that we are trying to address.

You can listen or read Vishavjit Singh’s interview on NPR here. For additional discussion about Sikh characters in the comic world, see a post by blogger Navdeep Singh Dhillon on the Langar Hall.