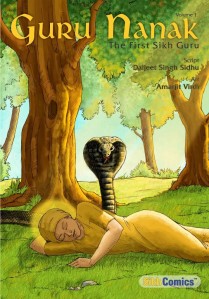 Back in February, I had the opportunity to review two graphic novels published by Gyan Khand Media (http://www.sikhcomics.com), a publishing house that creates comics based on Sikh history. The two I reviewed were stories of Guru Tegh Bahadur and Baba Deep Singh. The author behind Sikh Comics, Daljeet Singh, was also good enough to share the story behind the project as well.

Recently, I was contacted by Daljeet Singh who indicated that two new novels have been released. I was happy to again have the opportunity to review his comics, these two recounting the stories associated with Guru Nanak, the founder of the Sikh faith born in 1469.

The first volume covers from Guru Nanak’s birth through his revelation, and the second continues through to many of his travels across the Indian subcontinent. Two additional volumes are forthcoming. The volumes appear to be based heavily on the well-told janamsakhis, historically recorded anecdotes of Guru Nanak’s life written well after his death, which include supernatural tales and some of which have questionable veracity.

As the comics recount different episodes of Guru Nanak’s life, many verses from the Guru Granth Sahib are weaved into the story, as in previous comics released by Gyan Khand Media. While connecting for the reader historical accounts with Sikh scripture, the verses seem to be out of chronological context in relation to history, but nonetheless the excerpts from the Guru Granth Sahib are consistent with the lesson to be gained from each story. 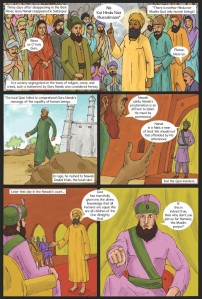 As opposed to the previous two releases that I reviewed, these two volumes of Guru Nanak’s life appear to make more use of multiple panels per page, rather than a single panel per page, which reduces the total number of pages of each comic book, but also improving the reading flow. Occasionally, some pages are entirely composed of text, and it would perhaps be more child-friendly to maintain the graphical nature of the comics to keep the reader interested.

I also noted that many of the images make use of more modern definitions of what a Sikh (or Guru) would look like. For example, images of Guru Nanak as a child show him with a joorha, or bun of uncut hair on his head, while we don’t have evidence that the practice of uncut hair was at all common among average folk in Punjab at that time. We should also note that there were no “Sikhs” per se until Guru Nanak developed a following.

Just as with the first set of novels, the materials and artwork used in these comics describing Guru Nanak’s life are of high quality. Vibrant and clean, the artwork is easy to look at and fits in well with the text. The imagery is uniquely created rather than based on already existing artwork, which makes the comics more compelling.

These first two volumes detailing the stories of Guru Nanak’s life provide a thorough account of those that are commonly known and told. As in previous graphic novels by Gyan Khand Media, I would estimate that the comics are more appropriate for older children in terms of content and reading comprehension.  At $3.99, pricing of the novels is as before, and they are again available print or digital format.

In sum, I find these volumes would be a valuable addition to the collection of any who have an interest in sharing stories of Guru Nanak with their children. These and other comics published by Gyan Khand Media are available for purchase at SikhComics.com or on Amazon.