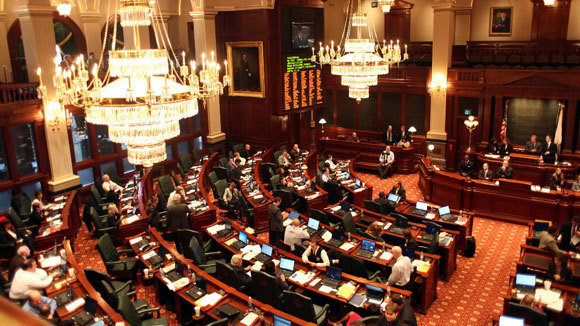 Making reference to the August mass murder of Sikhs in Oak Creek, Wisconsin, and subsequent attacks on mosques in the United States, the Illinois state legislature recently passed a resolution called HR 1193-Encourage Religious Tolerance to denounce hate crimes and encourage participation and civic engagement of minorities and immigrants (via @sepiamutiny):

The resolution, sponsored by Rep. Daniel Biss, (D-Skokie), is more of a statement against anti-Asian bigotry than a legal measure. But it has impact because it comes on the heels of numerous attacks against the South Asian community. Those attacks, in Chicago and across the U.S., provide evidence of growing intolerance the fast-growing community faces.

The resolution was introduced barely a week after the attacks by Illlinois State Representative Daniel Biss, and was formally adopted by the Illinois House of Representatives on November 27. The drafting of the language in the bill was a collaborative effort involving representatives of a variety of communities, including the local Sikh community:

The resolution “adds to the healing process of damage done to my Sikh American community,” said Rajinder Majo of Palatine, citing the Oak Creek temple massacre as the inspiration behind the resolution. Majo is a Sikh community leader who worked with Gandhi on the language used in the resolution, and calls the resolution “a sign that Americans care” for his community.

…Though the resolution pays particular attention to people of South Asian descent, [Executive Director of South Asian American Policy and Research Institute Ami Gandhi] says it is meant to be inclusive of all ethnic communities. The language in the resolution was carefully constructed by SAAPRI, though many groups were involved, including the Asian American Institute and Shoulder-to-Shoulder, an interfaith organization which includes Muslim, Jewish, and Christian community leaders. The Council on American-Islamic Relations chapter in Chicago was also a major player.

“Hateful actions like these are meant to make people of different religions and races feel isolated and marginalized,” he said. “I wanted to put forth this resolution to let members of the Sikh and Muslim communities know that we stand with them, that we support them, that we are proud that they are part of our communities and that we will not tolerate this violence against them.”

Read more about the resolution at MedIll Reports – Chicago. The full text of HR 1193 is available on the Illinois General Assembly website and also appears below.