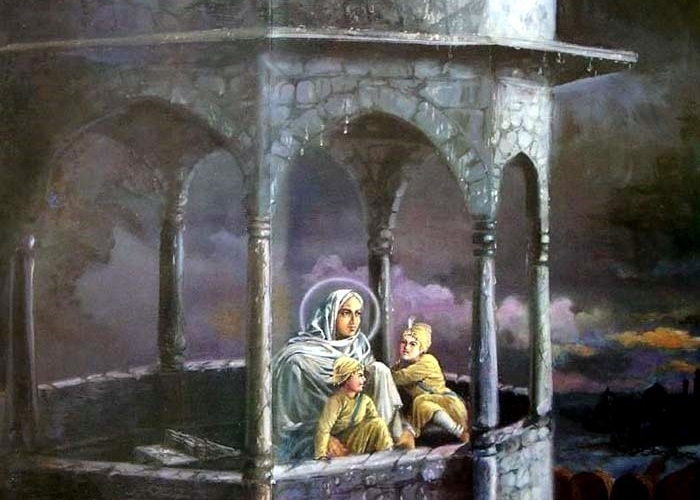 Today, Sikhs commemorate the martyrdom of the mother of Guru Gobind Singh, Mata Gujri, and his two younger sons, Sahibzada Zorawar Singh (age 9) and Sahibzada Fateh Singh (age 6). The three were kidnapped when the Sikhs were fell upon by Mughal forces in a surprise attack in 1705.

With the aim of wounding the growing Sikh movement, the governor of Sirhind, Wazir Khan, attempted to coerce and then force the Guru’s children to convert to Islam or face death. The children were defiant and steadfastly refused, and consequently were bricked alive into a wall. Mata Gujri, upon hearing this news, passed away in the open tower in which the three were imprisoned. The tragic martyrdom of these souls is today a point of significant inspiration for Sikhs across the world.

Gurdwaras now stand in the sites of their martyrdom and cremation in a location called Fatehgarh Sahib, near Patiala, Punjab, India.

An animated movie about this tragedy in Sikh history entitled Sahibzadey: A Saga of Valor & Sacrifice has been made available on YouTube. You can watch the film in its entirety below: