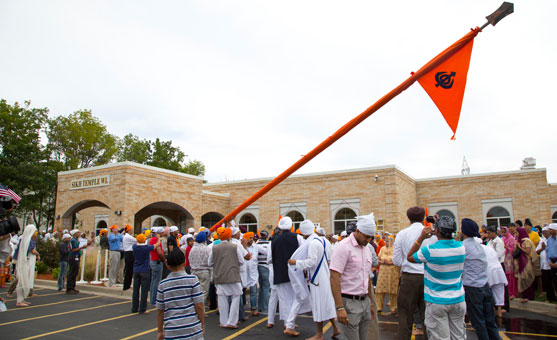 People gather outside the Sikh Temple of Wisconsin for the raising of the Nishan Sahib flag a week after the mass murder that occurred there. A group of about 50 men and boys unwrapped the orange cloth covering the pole, washed the pole with water and milk and then re-wrapped it with a fresh cloth. (source: USA Today)

In the shadow of the mass murder of Sikhs in Oak Creek, Wisconsin, Simran Jeet Singh discusses the growing narrative of Sikhs as victims in American society in the context of Sikh history and tradition:

A few of the prominent themes have included buzzwords such as “unprecedented,” “victimization,” and “suffering” endured by Sikhs in America.

Although these buzzwords rightfully point to the challenges faced by Sikh Americans, they fail to aptly capture the spirit and attitude with which Sikhs have embraced such challenges throughout history. Traditionally the Sikh community does not lament periods of persecution and hardship, but instead, celebrates the contributions and sacrifices made by the community members and greater society living within those moments.

Indeed, when Sikhs reflect upon their history which includes significant persecution, it is often with a spirit of rejuvenation and inspiration. This is the Sikh ethos of chardi kala — a mindset of optimism — that we often invoke and that has sustained our community through all its trials and tribulations in our 500-plus years of history.

Read more at the Milwaukee Journal-Sentinel.