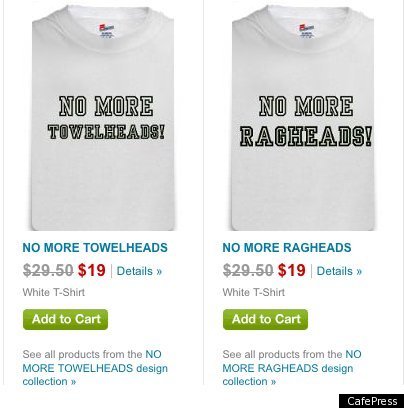 “No More Towelheads,” “No More Ragheads” T-shirts sold on Cafe Press last year. The shirts were removed from the site after public protest. (source: Huffington Post)

During the early years of the civil rights movement, when Negro was a perfectly acceptable term but its ugly cousin was already falling out of favor, southern politicians like Alabama Gov. George Wallace grew fond of the pronunciation “nig-ra,” luxuriating in the first syllable and then surrendering only grudgingly to the hedging of the second. Deliberately misusing the noun form of a group’s name as an adjective is another too-cute way of giving offense while pretending to do nothing of the kind. Jewish food and Jewish doctor mean the same thing as Jew food and Jew doctor, but one version is intended to sting.