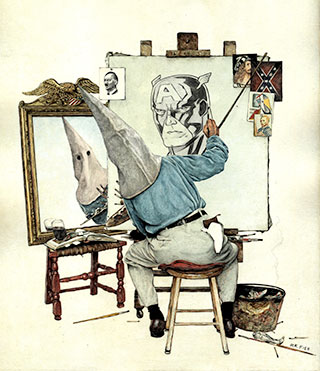 On truthdig, Chris Hedges examines the “disquieting renaissance” of white supremacy in the southern United States (via @jakaramovement):

The steady rise of ethnic nationalism over the past decade, the replacing of history with mendacious and sanitized versions of lost glory, is part of the moral decay that infects a dying culture. It is a frightening attempt, by those who are desperate and trapped, to escape through invented history their despair, impoverishment and hopelessness. It breeds intolerance and eventually violence. Violence becomes in this perverted belief system a cleansing agent, a way to restore a lost world.

As we saw with the August mass murder of Sikhs in Oak Creek, Wisconsin, by a white supremacist, the issue of white supremacy and the violence it spawns is largely left unspoken by the media, policymakers and law enforcement. A recent study has shown that violence arising from extremist right-wing groups has grown 400% since 1990, and yet these groups — of which white supremacy is a part — remain off the FBI’s radar.

In the shadow of this silence, the white supremacist movement is quietly perpetuating itself.