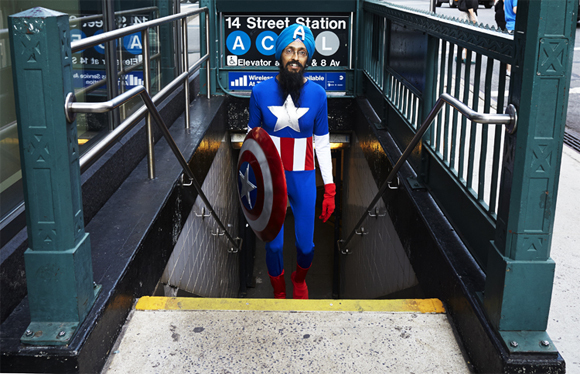 Earlier this summer, Sikh cartoonist Vishavjit Singh provided a glimpse of his foray through New York City dressed as the superhero Captain America. In an article in Salon magazine published this week, Vishavjit Singh shares more about his experience in challenging stereotypes:

I have been skinny all my life, and I felt a stirring of anxiety to be so exposed. Family and friends have pointed out my thin-ness for years, and the self-consciousness has sunk deep into my psyche. Before I could even confront the political statement of my costume, I had to confront my own inhibitions and body image. But I took a deep breath, and kept walking.

The next challenge was the reaction of my fellow Americans.

Vishavjit Singh narrates an interesting tale about the acceptance and resistance he experienced as he dressed as a comic book character, all-the-while with his turban and flowing beard.

Coincidentally, writer Navdeep Singh Dhillon addresses the lack of fully developed superheroes of non-white origin in the comic book world, which highlights why Vishavjit Singh’s experiment was so significant:

It surprises many people to know that Sikh superheroes do in fact exist — at least in prototype form — scattered throughout the decades with a seemingly abrupt halt in the 1990s. The earliest one that I know of is what could have been capitalized on as a pretty awesome superhero: Randu Singh, who was completely made into a symbol of the exotic, which I suppose is better than being a terrorist. Those are, apparently, the only two choices.

Read more about Vishavjit Singh’s experience as Captain America in Salon, and Navdeep Singh Dhillon’s assessment about the presence of Sikh characters in the comic book world on his blog.