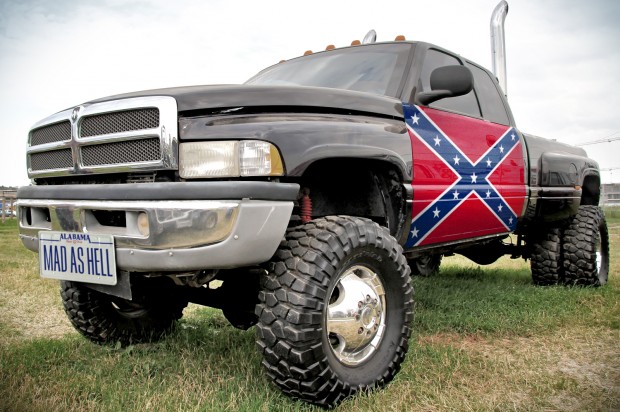 A pick-up truck with the Confederate flag, long associated with America’s legacy of enslavement of Africans. (Source: Salon.)

The website Salon prints an excerpt of sociologist Michael Kimmel’s book Angry White Men: American Masculinity at the End of an Era, in which the author describes larger patterns fueling America’s white supremacists:

Most are in their mid-thirties to early forties, educated at least through high school and often beyond. (The average age of the guys I talked with was thirty-six.) They are the sons of skilled workers in industries like textiles and tobacco, the sons of the owners of small farms, shops, and grocery stores. Buffeted by global political and economic forces, the sons have inherited little of their fathers’ legacies. The family farms have been lost to foreclosure, the small shops squeezed out by Walmarts and malls. These young men face a spiral of downward mobility and economic uncertainty. They complain that they are squeezed between the omnivorous jaws of global capital concentration and a federal bureaucracy that is at best indifferent to their plight and at worst complicit in their demise.

Not insignificant, the description provided in this excerpt seems to be rather consistent with the history of one notable white supremacist — Wade Michael Page, the mass murderer of six Sikhs in Oak Creek, Wisconsin, last year.

Read the full excerpt at Salon, and find the book by Michael Kimmel on Amazon.