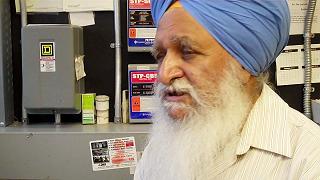 Reportedly, after a disagreement, 72-year-old Avtar Singh was severely beaten by a neighbor and then arrested by police in New Jersey in late July. (source: United Sikhs)

Since the murder of Dalbir Singh outside of his convenience store in Oak Creek, Wisconsin (in what is being called a robbery attempt) more attacks on and murders of Sikhs in the United States are coming to light.

Prior to the shootings in Oak Creek, a 72-year-0ld Sikh man in New Jersey was severely beaten – and then arrested by police – in an altercation with a neighbor:

On July 26th, Avtar Singh Ji went to Edward Koscovski’s shop to request him to move his truck that was parked and blocking the entrance of Avtar Singh’s gas station. The request turned into an altercation in which Avtar Singh Ji was brutally assaulted. “I kept on yelling that please let me go but nothing moved Edward from hitting me. When I turned around using all my strength, Edward smashed my face, broke my teeth and kept punching me in the stomach. He grabbed my Kirpan and threw it at his attendant. The attendant removed the Kirpan from the mian (cover) and hid the mian (cover) in a room inside. He also snatched my phone and put it out of sight” said Avtar Singh, who suffered injuries to his face and stomach.

Last week, on the other side of the country, Kashmir Singh was beaten to death in a robbery attempt in Fresno, California, while on duty as cashier:

A 43-year-old clean-shaven Sikh was allegedly murdered by unidentified persons at Fresno in California, USA, on Thursday. The miscreants allegedly killed Kashmir Singh in a bid to loot a convenience store, where he worked as a cashier.

Kashmir Singh’s murder was particularly sadistic, as “the assailants had allegedly thrashed Kashmir with iron rods, which proved fatal.” In Kashmir Singh’s case, one wonders why the assailants went so far simply to rob a store.  Let us not forget the stabbing attack on a Sikh man in the same city at the Fresno International Airport late last year.

We are told that these attacks were not motivated by hate, and this is not to claim that every attack on a Sikh in this country should be labeled as a hate crime. However, one wonders if the sustained method in each of these assaults suggests more than a simple altercation, or a simple robbery attempt.